The venerable Unicode standard is undergoing an update. We report on the news and go behind the scenes with a brief overview of the philosophy and practical use of the standard.

Most people stop thinking about Unicode when introducing new Emoji characters. However, the primary purpose of the Unicode standard is not just to share expressive characters for use on mobile applications just for fun; it also facilitates communication in all human readable languages ​​and supports science and research with its scientific symbols and scriptures in ancient languages.

In the words of the Unicode Consortium:

The Unicode standard is the basis of all modern software and communications in the world, including all modern operating systems, browsers, laptops and smartphones, as well as the Internet and the Web (URL, HTML, XML, CSS , JSON, etc.).

This shows that Unicode is not only useful for communication in the modern world, but is also the guardian that protects the memory of niche or extinct cultures.

Further elaborating, technically, a Unicode script (according to Wikipedia) is:

A set of letters and other written signs used to represent textual information in one or more writing systems. Some scripts support one and only one writing system and one language, for example Armenian.

In regular expressions, you will usually find them denoted with p {..}, like p {Latin} etc.

As for the fun aspect, v14 also added the following 37 emoji characters: 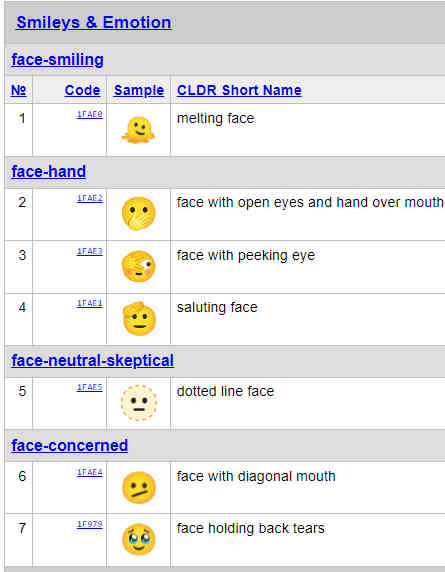 At I Programmer, we have extensive coverage of the Emoji world. Check that the Emoji subcommittee reopens the submission process and World Emoji Day picks the syringe to sum up 2021 for the last.

Other minor additions have found their way, including:

Everything is fine, but to get your hands on the new characters, you’ll have to wait until your favorite apps and fonts are upgraded to support the new standard. The same delay applies to programming language support. Perl is still the fastest to adopt the latest Unicode standards. For example, Unicode 10 support came with Perl version 5.28 in 2018, while Perl 5.32.0 came with Unicode 13. The latest version of Perl is 5.34.0, released in May 2021, and in as such it didn’t incorporate the latest standard but I guess the next one will.

And what can you do with Script programming? Use them to manipulate text, like in regular expressions. This is described in Advanced Perl Regular Expressions – Extended Constructs where I have a file:

What’s the best way to do this? Renaming the file to only contain characters from the universally recognizable ASCII character set, which means we need to remove it from all non-ASCII characters. But in order to do this, we must first introduce blocks in addition to scripts. According to perlunicode:

Unicode also defines blocks of characters. The difference between scripts and blocks is that the concept of scripts is closer to natural languages, while the concept of blocks is more of an artificial grouping based on groups of Unicode characters with consecutive ordinal values. For example, the “Basic Latin” block is the set of characters whose ordinals are between 0 and 127 inclusive; in other words, ASCII characters. The “Latin” script contains a few letters of it as well as several other blocks, like “Latin-1 Supplement”, “Latin Extended-A”, etc., but it does not contain all the characters in these blocks.

Armed with this knowledge, we can proceed to resolve the portability issue. There is the [[:ascii:]]The POSIX class and / or the Unicode block p {InBasicLatin} which match all ASCII characters, so by negation [^[:ascii:]]or P {InBasic_Latin} we come to all non-ASCII. Like everything in Perl, TMTOWTDI (there is more than one way to do this). and this example can be used as a basis for the formation of more elaborate use cases later.

But what do we really mean by ASCII?

For the solution, see the rest of the article, but the point is, the Unicode standard organizes concepts into concrete blocks so that you can work with them intuitively.

All information about scripts, blocks and the rest can be found in the standard’s clear documentation on Unicode.org. And you can find all the new Emoji additions at Recently added emoji.

Announcement of the Unicode® Standard, version 14.0

Query Unicode from the command line

Getting to grips with regular expressions